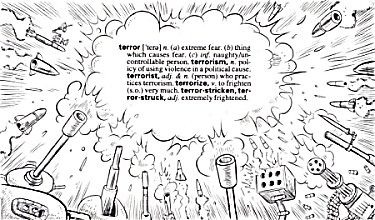 A “War on Terror” can't be won, because it
can't be fought

A “War on Terror” can't be won, because it can't be fought

It's widely asserted the United States is fighting a “war on terror.” But that's absurd.

It's widely asserted the United States is fighting a “war on terror.” But that's absurd.

Terror is a tactic – an attempt to undermine the morale of a much stronger foe, whom the “terrorists” know they cannot defeat in traditional battle.

When our ancestors sent John Paul Jones in a fast frigate to burn some English coastal towns and harass their shipping during the American Revolution, that was an attempt at terrorism – engaging English non-combatants (who had little if any say in their King's colonial wars) on the home front in an attempt to convince the British Parliament this seemingly remote and distant war was not a good idea, when we knew darned well our fledgling Navy wouldn't have stood a chance in a fleet action against the Royal Navy. (The Royal Navy even beat the French – though fortunately shortly AFTER that military genius Cornwallis found the French Admiral DeGrasse at his back at Yorktown.)

Terror is a tactic. Imagine the New York Yankees taking the field against the Baltimore Orioles, and announcing their opponent this night is not the Orioles themselves, but that instead they are waging a “battle against the bunt.” They could bring all seven of their defensive players well inside the base paths, and pretty successfully stop the bunt. Of course, the Orioles would circle the bases like merry-go-round ponies after hitting what would otherwise be easily-caught flies to the outfield. But darn it, the bunt would be defeated!

Terrorism is a tactic. It makes no sense to launch a war against a tactic.

Imagine Franklin Roosevelt announcing on Dec. 8, 1941, that we were declaring war not on Japan, but on the evil tactic of the sneak attack via aircraft carrier.

Wising up, the Japanese could easily have agreed to scuttle all their aircraft carriers, and instead stationed battlewagons just off Los Angeles, San Francisco, Sydney and Seattle, shelling those cities to smithereens.

Imagine Roosevelt, Marshall, and McArthur responding, “Well, that's OK then. We have no objection to the shelling of our major west coast cities, so long as it's done by conventional battleships and not those darned, sneaky aircraft carriers. This was a war against sneak attack by aircraft carriers, after all, and with Admiral Yamamoto's gracious scuttling of the Japanese carrier fleet, we consider that we've brought our war to a successful conclusion, even though the Japanese still occupy all of East Asia as far south as Australia. The residents of our West Coast cities will just have to move further inland, that's all.”

What tactic will we make war on next, the artillery barrage?

Terrorism is a tactic. It makes no sense to launch a war against a tactic, no matter how nasty, because it ignores the fact that we or our friends may well choose to adopt tactics in which someone else might see similarities to the enemy tactics we condemn, and that meantime the enemy can simply choose another tactic. What tactic will we make war on next, the artillery barrage? The amphibious landing? Chess players resorting to the devilish fianchetto?

The other problem with declaring “war” against a tactic, of course, is that there's no reasonable point at which the subjects of the war-making government can expect that “war” to end. There are always going to be a few more goofballs out there, yearning for a way to extract revenge on “The Great Satan” for some perceived slight to them or their ancestors ... right? They don't and won't ever have fleets of aircraft carriers or armored divisions to invade us through Mexico or Canada. So their only option is what we choose to call “terrorism.”

Americans gladly put up with the draft, margarine rationing, wage controls, and all kinds of other hardships (many unnecessary, harmful, and counterproductive, as could be expected from a loose cannon like Franklin Roosevelt, though that's another story) to defeat Hitler and Tojo. But the deal always was that once the thugs in question were dead and their armies defeated, it would all be over and we could turn on the lights again.

When is it we can reasonably expect a “victory” in this war on terror, whereupon we can sell off the airport metal detectors for scrap, fire all these TSA body-gropers, start carrying our hunting rifles onto the planes again, and tell the banks it's once again none of their business why we want to withdraw or deposit $50,000 in cash, since we're no longer looking for sneaky Arab terrorist money-launderers, and surely that stuff never had anything to do with red-blooded Americans dodging the income tax ... did it?

Besides, if we're engaged in a “War on Terror,” how are we going to decide whether our enemy in the Caucasus is the Russians or the Chechens? Which side initiated the use of terror, there? (Hint: The Chechens never tried to conquer Russia, leveling whole cities and kidnapping the children to be hauled home and raised in a foreign culture and religion.) After all, we can't make war on some terrors, and ignore others, and claim to be fighting a “War on Terror” ... can we? Wouldn't that be like fighting the 1940s Nazis in North Africa, but not in France, since France was harder to get to?

No one knows what the heck a “War on Terror” really means except the permanent institutionalization of the predictable paranoia of tyrants afraid their oppressed peasant classes will eventually wise up and shoot back.

Since no one knows what the heck a “War on Terror” really means except the permanent institutionalization of the predictable paranoia of tyrants afraid their oppressed peasant classes will eventually wise up and shoot back, making the absurd claim that we're fighting a “War on Terror” easily justifies anything that makes our rulers “feel safer,” starting with the random search and disarming of domestic airplane passengers, subway passengers, and down-on-their luck residents being expelled at gunpoint from waterlogged New Orleans (by guardsmen bringing home the skill and habit of disarming civilians learned in their deployments to Bosnia and elsewhere, just as I've long predicted.)

What ever happened to fighting a war against – oh, I don't know ... the people who attacked us, regardless of their tactics?

And this may get us to the heart of the matter: Is all this nonsense merely so we can avoid confronting the simple but Politically Incorrect act of naming our real enemy?

What ever happened to fighting a war against the people who attacked us, regardless of their tactics?

Since Sept. 11, 2001 – if not earlier – we've been at war with a considerable bunch of radical, fundamentalist Middle Eastern Islamic men, men who shoot popes and behead Christian schoolgirls in Indonesia and lady missionaries in Iraq and otherwise behave in a manner which would get them put outside in the cold till they learn to stop soiling the carpets in any civilized home even at Christmastime, and who unfortunately draw comfort and support from a much larger mass of mewling Muslims (even here in the West) who may not be actively taking up arms (though they do seem to be out to burn every automobile in France, as this is written in early November, 2005), but who are willing to lend them both moral and financial support, whining, “Well, what do you expect when there is no justice for the Palestinian people who were kicked out of Jordan by the son-of-a-dog Jews after the regrettable events of September, 1970?” – at war with a bunch of wild-eyed Middle Eastern Mohammedans who hope to expel any remainder of post-15th-century cultural progress from their homelands, the better to lead their people back to a vicious 14th century religious tyranny, complete with the stoning to death of rape victims, Christian missionaries, and any woman who goes out in public with her forearms exposed.

Now, do such folks have a right to live under Sharia law? The answer is pretty much yes – pluralism, self-determination and all – though of course we commiserate with any minority who find themselves stranded in regions where such gibbering loonies hold sway, and who wish they could live in conditions we're more likely to describe as “freedom.” The solution, however, is to allow those who wish to live in freedom to emigrate (while concentrating on restoring our previous freedoms right here at home), so long as they comply with a few reasonable requirements, like: They should learn English if they want to vote, they have no right to demand our women dress up like bag ladies at the public swimming pool, and they have to offer some convincing evidence that they understand and embrace quaint notions like “religious tolerance and the separation of church and state.”

Then we could and should have a sensible, open debate in Congress about whether this struggle properly fits any standard definition of a “war,” and how best to prosecute it – starting with how we locate and identify our enemy.

For instance, the Constitution allows the equipping of private warships under “letters of marque” to make war on selected foreign enemies. Might not the retention of such mercenaries, giving them a “license to kill” those designated enemies and seize their stuff anywhere away from our shores, make more sense than undertaking, oh – I don't want to be TOO ridiculous here – the task of rebuilding the entire infrastructure of the cobbled-together and decrepit state of Iraq, while taking fire from every disgruntled towelhead who can lay hands on a Kalashnikov and scrape up bus fare to Baghdad?