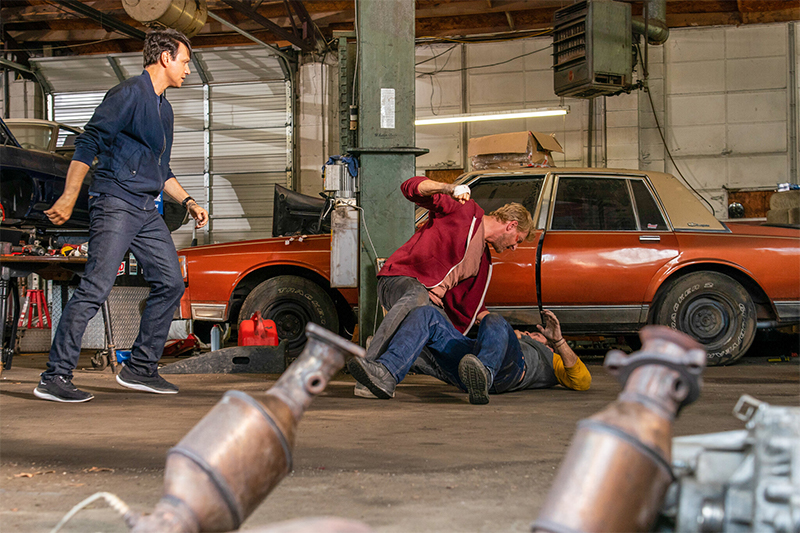 Daniel (Ralph Macchio, left) and Johnny (William Zabka) squared off in the original “Karate Kid” movie. In “Cobra Kai,” they face new adversaries, one of which is time.   © 2021 by Alexis Soloski   Photo © 2021 by Tina Rowden/Netflix

In a group interview, the original stars of “Karate Kid” discuss their enduring bond and the new, reunion-heavy season of the sequel series, “Cobra Kai.”

In that first “Karate Kid” movie, the elbow strikes and flying kicks never really pummeled the actors or stuntmen on the receiving end, not even the controversial crane kick that won Ralph Macchio’s Daniel LaRusso the 1984 All-Valley Karate championship. The only blow that actually connected? The right hook that Elisabeth Shue’s high school junior, Ali Mills, throws during the country club scene.

“Right on the jaw,” William Zabka, who took the shot, said as Shue laughed in a neighboring Zoom window. “She packs a real punch.”

So did the movie. A box office smash and a slumber party totem for teens and tweens of the 1980s and beyond, it birthed two immediate sequels, an animated series, a partial reboot starring Hilary Swank and a head-scratcher 2010 remake that shifted the action to China. That crane kick? It had legs.

In 2018, Jon Hurwitz and Hayden Schlossberg (the Harold & Kumar movies) and Josh Heald (“Hot Tub Time Machine”), brought the franchise back to the mat with “Cobra Kai.” 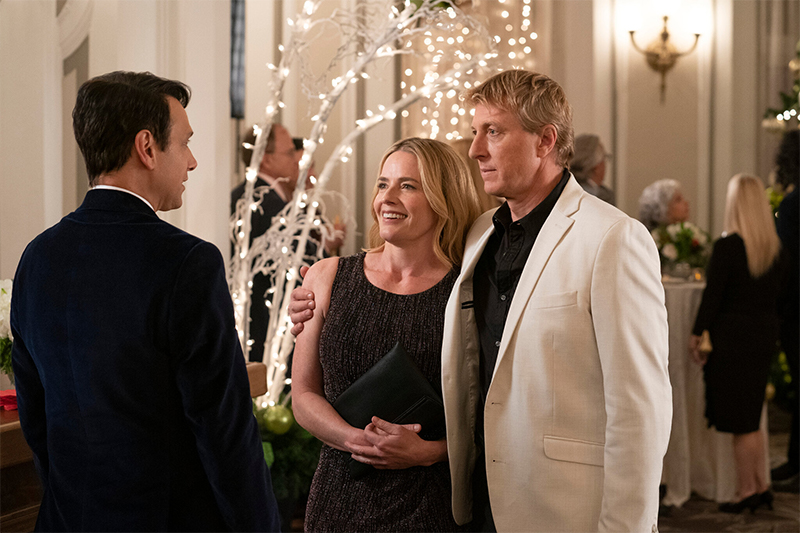 For Season 3, Elisabeth Shue reprised her role as Ali, who in the original film was at the center of Daniel and Johnny’s conflict.   Photo © 2021 by Curtis Bonds Baker/Netflix

Finally, in the latter episodes of Season 3, which premiered Friday on Netflix, Shue’s Ali returns in person, in setups that gesture toward the Golf N’ Stuff and country club scenes from the film.

On a recent weekday, Macchio, Shue and Zabka met up again, this time via Zoom, to discuss their shared legacy and who really won that long-ago championship. These are edited excerpts from the conversation.

Let’s settle this: The crane kick in the 1984 tournament. Was it legal?

WILLIAM ZABKA Technically, it was not legal. Am I right, Ralph? You’re not supposed to kick somebody in the head with no pads on in a real tournament.

RALPH MACCHIO I would venture to not disagree with that. Although, if you play back the fight. I took one right here [gestures to the side of face] two points back. That was allowed.

ZABKA I was given a warning!

MACCHIO I didn’t get a warning. It was over.

ELISABETH SHUE I heard it [the crane kick] was a made-up move. That it isn’t actually a karate move.

ZABKA It is now. Lyoto Machida, he knocked somebody out with that. He’s a karate guy in the U.F.C.

MACCHIO YouTube that and you’ll see. Guy walks right into it. But no one took as good of a hit as Mr. Zabka. Listen, if he didn’t take the hit brilliantly, the kick doesn’t work. So we both won.

Elisabeth, did they ever let you do any karate?

SHUE I did get to play a little bit of soccer. I got to do my back handspring. I tried to put a back handspring into almost every movie I was in in the ’80s. If you look at “Cocktail,” there’s one there, too. I actually did a back handspring and hit Tom [Cruise] in the face. Funny story. Chipped his tooth.

To be honest, back then I did feel like, “I want to be doing karate.” It was hard to not be in the middle of that story line. But that would have been absurd.

SHUE I got those punches in. That’s all that matters. As long as I punch a few people in the face and I can do a back handspring, I’m good.

That first movie really holds up while so many ’80s teen movies don’t. Why?

MACCHIO There’s so much pop culture that surrounds “The Karate Kid”: “Sweep the leg” or catching flies with chopsticks or “Get him a body bag.” That’s all fun and great and adds to the legacy, but the film worked on a human level. Those elements of mentorship, bullying, single parenting — these are all elements that stand the test of time.

ZABKA You can watch the movie again from the beginning, knowing exactly how it’s going end. You’ve seen this crane kick a million times, and you’ll still be sucked into the moment. That’s [the director] John Avildsen. And Robert Kamen, who wrote it. We were lucky enough to get to play those characters. The rest is magic. 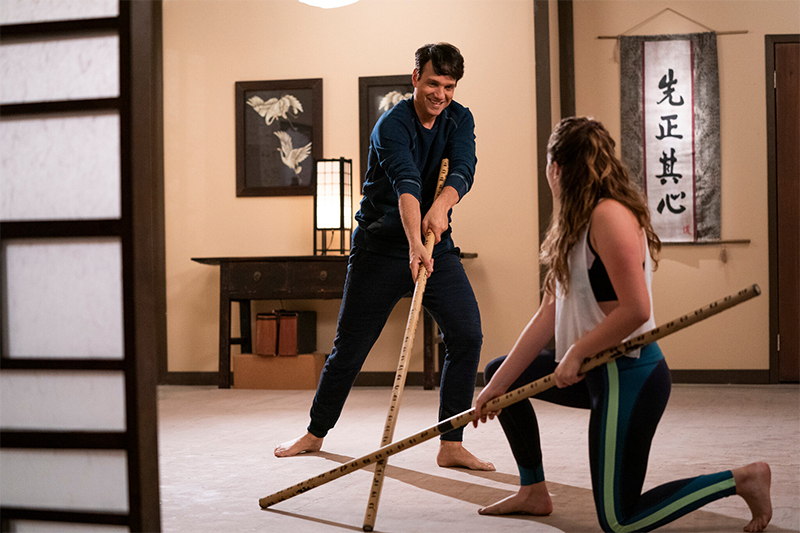 Macchio with Mary Mouser, who plays Daniel’s daughter. Revisiting these characters, he said, has been an emotional experience for him, Shue and Zabka: “This thing has lived with the three of us.”   Photo © 2021 by Bob Mahoney/Netflix

The movie became a huge hit. How much did that determine the arcs of your careers?

MACCHIO It affected me in the most profound and positive way, and now I’m reaping the rewards and benefits and privileges of that role. But our town is so tunnel vision-y. By the time “My Cousin Vinny” came around, it was a big challenge. I could not get in the room. And then I did, and I got that part on the drive home. But that’s just part of it, man. I chose to always be creative and during those lean years in the ’90s, to be there for my kids. So it kind of worked out perfectly.

ZABKA I was the guy that took that crane kick. You get typecast. You know, “You served up taking the fall, do it in this one and be a bigger jerk.” I had a lot of those come my way. Then I got into filmmaking and made a short film. So it’s all a blessing, and here we are in “Cobra Kai” and it’s all come full circle. I get to play the character that launched all this and turn him inside out and rip him apart and dissect him and put his heart out for the world, and that’s just a thrill.

SHUE I had a definite up-and-down journey, just like these guys, coming to terms with how I was birthed into the business as a “girlfriend.” One of the reasons I wasn’t in “Karate Kid II” is I was actually in school. Going back to school was my way of saying, “I’m not going to be defined by this business.” All three of us had this amazingly successful movie and then had to really claim our lives and push ourselves to find the parts that were more complicated, that would challenge us, so we wouldn’t be defined by this one film. I’m really proud of that.

So why was this the project that brought you all back?

ZABKA I’d worked with Josh Heald on “Hot Tub Time Machine.” And I knew Jon and Hayden. They dropped this bomb on me in a Mexican restaurant. We barely got through a basket of chips when they grabbed Johnny Lawrence out of me and laid everything on the table. I said: “I’m already carrying the torch of the bully for 30 years. Is this going to just expand that? Am I going to end up with the proverbial crane kick at the end of this whole thing? And they’re going to really hate me? Because I don’t want to do that. I want something that’s going to be human.”

They said no. I just trusted them. I said: “I’m in. Go get Ralph. Let’s see what happens."

MACCHIO I had said no more than a handful of times to very credible writers and filmmakers and studio people. It always seemed smarter to me to let the legacy stand. These guys came in with a very well-crafted pitch. It sounded smart and fresh. These guys executed brilliant storytelling. And William Zabka, without him delivering on that level, I don’t think the show works.

ZABKA Thank you for that, Ralph.

MACCHIO Now you owe me one.

SHUE The thing that really changed my mind and made me excited about the possibility of being on it was the scene in the bar when you were talking about me and you’re [both] still sort of obsessed with me. It just made me laugh out loud.

Then the guys were amazing in terms of creating a way for her to enter the world that would be would be respectful of her growing into a woman, a complicated woman, who didn’t have a perfect life, who was dealing with her own issues.

How did it feel to be back together at Golf ‘N’ Stuff and in a replica of that same country club?

SHUE I loved it. Ralph and I were talking about how emotional it was to reconnect to this innocent place in your life, and to realize the impact that these actors and this world has had on your life.

MACCHIO There’s been that through the entire series for me. With Billy, standing in our first scene together. In the scenes with Mary [Mouser], who plays my daughter, talking about Mr. Miyagi [Daniel’s fatherly sensei in the films, played by Pat Morita in an Oscar-nominated performance]. This thing has lived with the three of us. We’re all connected to this universe.

Elisabeth, were you tempted to punch Billy, just for old times?

SHUE I punched you in the shoulder a few times.

ZABKA When she hands me the stuffed animal at Golf ‘N’ Stuff, she didn’t hand it to me. She thumped it into my chest. She’s so competitive.

SHUE I beat you at air hockey.

So how many seasons before Ali gets a fight scene?

SHUE It would be hilarious. Ali comes back Season 9 to start her own dojo.

MACCHIO We’ll be ready for it.

ZABKA She had two karate boyfriends in high school. She had to have learned a few things.

What is her dojo named?