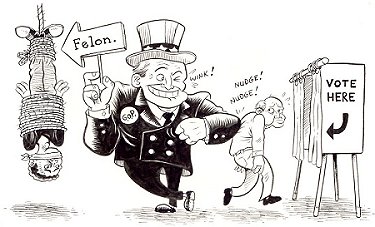 How States Use Felony Convictions to Change Voter Behavior

Many felons have been convicted of crimes of violence, but they are a minority of the total felon class.

To answer this question we need to look at how someone becomes a felon via the criminal justice system. A common felony conviction is for check fraud. Two people are arrested for check fraud. The police, as is common, write both cases up as felonies, and send the paperwork to the district attorney. The district attorney is the one who will make the determination if the charges will be pursued as felonies or misdemeanors.

What will make the determination? What controls so much of American life – money. If one of our suspects is lucky enough to be able to afford a private attorney, the attorney will meet with the DA, and most likely negotiate a lower charge that will not result in a felony conviction. The second suspect, who cannot afford a private attorney, will be represented by an overworked and underpaid public defender. This case being a relatively minor one for check fraud, the public defender may not even see his client until he appears in court. The district attorney has no incentive to negotiate a lower charge with the hapless public defender. So suspect number two will remain in jail, unable to post bail, and will be convicted of felony check fraud.

Many felons are convicted simply because they are too poor to afford a private attorney.

Many felons are convicted simply because they are too poor to afford a private attorney. The second part to the rapid growth in the numbers of convicted felons on nonviolent charges has to do with district attorneys burnishing their felony conviction numbers before running for reelection. The more felons convicted, the stronger a campaign they run against potential opponents. Many DAs cite the number of felons convicted on their watch during reelection campaigns. But this is not the real impact of the felony scam.

In over 30 states, convicted felons automatically lose their right to vote in elections. Blacks and Hispanics represent a disproportionate number of those convicted of felonies. In the state of Iowa, which has only a 2% Black population, nearly 20% of all convicted felons are black. In many states, nearly 80% of the convicted felons are black and Hispanic. These people are effectively removed from the voter roles, even if their crimes were relatively minor and happened years ago, and the felon has lived a law abiding life since then. The numbers can be staggering. In Florida, the site of a well remembered closely contested presidential election in 2000, nearly 600,000 people are on the felony rolls, with the majority of those being blacks. Makes you wonder what the outcome in 2000 might have been if some of those felons could have voted?

What about felon rehabilitation? Many states, in theory, have a process by which someone convicted of a felony can become “rehabilitated” and get their legal rights back. The reality is that many of these rehabilitation plans are akin to the guarantee of civil rights in the constitution of the former Soviet Union – words without any real meaning.

In Alabama, a felon can apply to recover his good name, but only after paying massive amounts of fees, and supplying a DNA sample – even if his conviction was for writing a bad check! Needless to say, not many apply. In Florida, the convicted felon must attend a public hearing run by the governor periodically around the state, and make potentially embarrassing information about conduct from years ago available to the public. Some states that seem to have a more lenient and straightforward procedure for felons to regain their rights turn out to be wolves in sheep's' clothing.

The state of Nevada is a good example. If a convicted felon has been honorably discharged from probation or parole, he is eligible to apply for a reinstatement of his rights. The difference between probation and parole is an important one. Probation occurs when the judge reaches an agreement with the defendant to not serve any prison time in lieu of community service, restitution, and regular meetings with a probation officer. Parole occurs when the judge sentences the defendant to a jail term. While in jail, the defendant plays by the rules – stays out of trouble, avails himself of whatever educational and other rehabilitation services are available, and is released early from custody by the prison parole board. The parolee will have to meet with a parole officer and follow his directions – get a job, pay some restitution, and not associate with criminals, until the date his original sentence would have expired.

In Nevada, if either one of these conditions is satisfied, the felon can apply for his rights to be reinstated. It seems straightforward, but many do not apply, because of what is involved. The paperwork appears to be minimal – the actual pardon application is only one page long – but this is only the beginning. The felon must now go back to the police department and be photographed and fingerprinted yet again, as if he was being booked again for a new crime. The pardon application is not adjudicated by an impartial judge. No, it is decided upon by the very people who had an interest in sentencing the criminal – the police department and the probation and parole agency. They make a recommendation to the pardon board. The pardon board itself meets only sporadically. There are years where they do not meet at all. So the entire process may take over 2 years. Even if the pardon is granted, the felon's information will still show up in the police computer system, just with the notation that a pardon was issued.

Probation will mean paying back what was stolen, in this case the value of the bad checks, but also expenses such as court costs, counseling fees, and even a monthly fee to the probation and parole department. These fees can easily run into the many thousands of dollars, which the probationer likely does not have. Frequently, all requirements of the probation are met, except for the full payment of these fees. As a result, the probationer will be discharged from probation, but it will be with a dishonorable discharge – which makes him ineligible for rehabilitation and rights reinstatement.

In addition to nonviolent property crimes, such as check fraud or minor embezzlement, many people become felons from simple drug possession charges. We are not talking about so-called drug kingpins, but people caught with relatively small amounts of illegal drugs. Once again, access to financial resources makes all the difference. A small time drug defendant who can afford a lawyer will frequently have his case pled out to a lesser charge, whereas the indigent defendant on identical charges will have his case adjudicated as a felony.

Conservatives do not want these laws changed because they know that most felons who would recover their rights are likely to be democratic or independent voters. Republican politicians frequently turn this into a law and order issue during runs for office. They couch the issue in terms of “coddling criminals”, and it works because most people still labor under the misconception that the majority of convicted felons are guilty of violent crimes.

The retribution the system takes does not end with the loss of voting rights. Many states prohibit entirely, or place restrictions on, the benefits convicted felons can receive. In some states, this can extend to state funded education loans or job training programs. So a felon who successfully served his time, and was discharged from probation or parole honorably, can find himself cut off from state programs to help him reintegrate into society at the moment he needs help the most. What is the net result? High return-to-prison rates for all convicted felons.

Until more states pass reform laws, the public needs to see the felony scam for what it is really about – money and the suppression of progressive voters, not law and order and public safety.

Luckily, there has been some movement on this issue. The governor of Iowa will shortly sign a bill that will restore voting and other rights to most of that state's 80,000 felons. Last year, the state of Nebraska, no hotbed of liberalism, passed a similar measure, and many other state legislatures are now debating similar measures. But until more states pass reform laws, the public needs to see the felony scam for what it is really about – money and the suppression of progressive voters, not law and order and public safety.