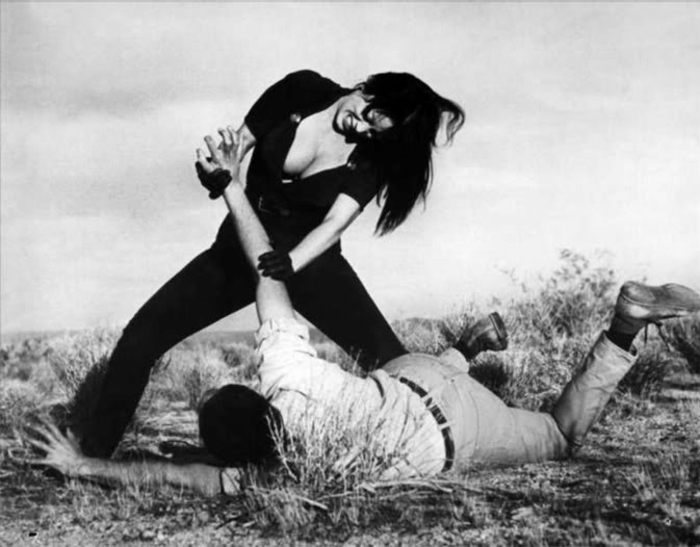 B movie legend Tura Satana initially took up karate and aikido to exact revenge upon her rapists. When that was taken care of, she used her skills to teach Elvis how to dance and change the course of cinematic history.

It's a classic martial arts narrative: the young hopeful stumbles upon a masterful display of mental control and physical skill and realizes that he wants to learn. So he approaches the person who put on such an impressive clinic and blithely says that he wants them to teach him. But the master isn't so easily impressed with the young upstart's enthusiasm. Martial arts aren't easy, nor a passing fancy, the master informs their potential pupil. You have to be serious about this.

But the players were a little different back in 1956 when an up-and-coming singer named Elvis Presley approached the teenage dancer Miss Japan Beautiful (aka Tura Satana) backstage at Chicago's Follies Theatre. He was quickly becoming a fan—he'd previously caught her act in Biloxi nine months earlier and briefly made her acquaintance after the show—and wanted to know how she could move the way that she did when she was on stage. Satana told the future star (and karate enthusiast) that the strength and athleticism that she displayed in her performances was a result of her martial arts training.

"He asked if I could teach him," Satana recalled in conversation with famed author and groupie Pamela Des Barres for a chapter in her book Let's Spend the Night Together: Backstage Secrets of Rock Muses and Supergroupies. "I told him, 'Martial arts is not only a disciplinary art form, it also teaches you control,' and he said 'Well you sure got control!'"

As Satana explained to Des Barres, she went on to teach Elvis a lot about physical movement and control over the years (and you can read about those lessons in far more giddily lurid detail in the book). But before she taught him to how to use his mouth, Tura Satana, the martial arts-influenced dancer, taught Elvis how to move his hips.

Not everyone believes Satana's version of events. Chicago Magazine's Geoffrey Johnson, for instance, argues that the timeline of her story doesn't really align with Elvis's ascendance to superstardom. But what's amazing about Tura Satana is that, even if that particular story is apocryphal, the rest of her documented life story remains downright epic. And, if it is true, giving Elvis his trademark pelvis would still rank among one of her least interesting accomplishments in martial arts and entertainment. 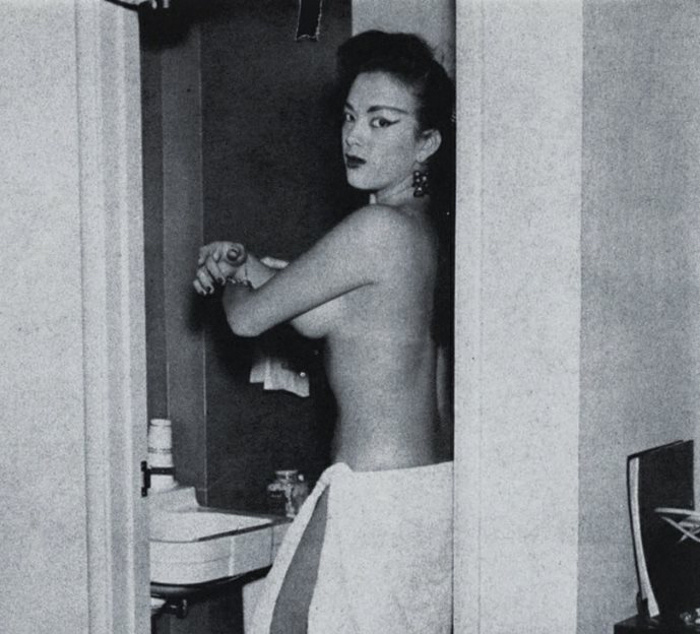 Tura Satana (nee Yamaguchi) was born on July 10, 1938 in Hokkaido, Japan. Her father, who was part Filipino, acted in silent films. Her mother, who was of Cheyenne Indian and Scottish heritage, was a circus performer. They moved to the United States when she was four years old, but it was far from the new start her family had hoped for. Tura and her father spent two and a half years in the Manzanar internment camp for Japanese Americans before being able to reunite with her mother and try to build a life for themselves in Chicago.

But Tura's childhood in Chicago was also fraught with danger. At school, she was tormented for her Japanese heritage. "[I] fought my way going to school and coming back," she explains in Jimmy McDonough's Big Bosoms and Square Jaws: The Biography of Russ Meyer, King of the Sex Film. "I was constantly taunted about being a Tojo, a monkey-person." When she was ten years old, a group of five teenagers approached her on her way home from an errand to buy bread for her mother, threw her in a car, and raped her. Then they left her for dead in an alley.

The fallout from her rape only further victimized the young girl. Her attackers were never prosecuted. According to McDonough's book, Satana later found out that the judge had been paid off. She was sent to reform school for the crime of "tempting" her attackers ("Everyone blames you for being raped, not the rapist," she mused on her punishment in her unpublished autobiography.)

After that, Tura began taking martial arts lessons with her father in an effort to protect herself. "I was studying aikido, which is very good for women, because they don't have to worry about ruining their hands," she told an audience during an appearance at the Santa Monica Barnes & Noble bookstore on June 27, 2003. "A combination of karate and aikido and judo. It's basically using your opponent, and his strengths and his weaknesses."

But there was also another motive behind her to training: vengeance. "I made a vow to myself that I would someday, somehow, get even with all of them," she once wrote of her rapists. 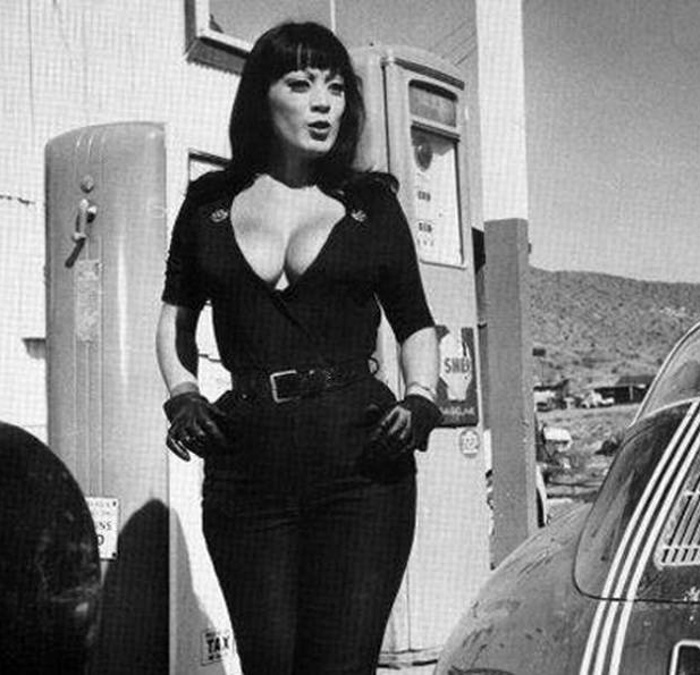 In addition to her more traditional training—although the actual source of this information is hard to pin down, she is widely reported to have earned a green belt in aikido and a black belt in karate—the young Tura formed a girl gang to patrol her community. "It was a girls gang that could take care of themselves, but we didn't go around looking for trouble," she said in a 2008 interview with Zuri Zone. "Usually we went looking to prevent trouble, especially to other girls."

Eventually, she was able to exact physical revenge on all of her rapists. Although she never discussed the event(s) in any detail, she did occasionally reference the culmination of her I Spit On Your Grave-like quest with pride. "They never knew who I was until I told them," she wrote in her autobiography.

In an effort to keep their daughter in line, Tura's parents forced her into an arranged marriage with a family friend while she was still in her mid teens. But Tura Satana couldn't be so easily tamed, and she ran away to the burlesque world, taking little more than her new surname along with her. Although that world wasn't perfect either—many of the dancers were jealous of her skill—she did manage to find some semblance of community and compassion there. When her second marriage to a jockey ended in his tragic death, she credited dancing with helping to save her.

It was also on the club circuit that she met and romanced Elvis, among other famous admirers, and began to attract attention from the film world. She landed small but pivotal parts in pictures Irma La Douce with Jack Lemmon and Shirley MacLaine and television programs like The Man From U.N.C.L.E. (in an episode that also featured a very young Kurt Russell). Then she was given an opportunity to audition for the latest film by the infamous Russ Meyer. Satana almost turned down the chance, because she wasn't thrilled with Meyer's reputation as a sexploitation-happy filmmaker, but her agent assured her that this film would be different.

In addition to the ball-busting attitude that she added to what would soon be retitled Faster Pussycat, Kill Kill, Satana also brought her physical skills and knowhow to the production. "I did all my own fight scenes. I choreographed all the fights. I had to literally carry some of the guys through the fight scenes because they were afraid of getting hurt. Especially the first guy that I broke his neck [in the film]. He was scaredest of all. He was the biggest chicken when he had the tarantula! But nobody ever got hurt."

First released in the summer of 1965, Fast Pussycat was almost unlike anything that film and television has ever seen before. Satana's Valma and her gang were big-bosomed bad girls, yes, but they were also physically skilled, intimidating bad girls in a world that was still months away from the American television debut of The Avenger's karate-kicking Emma Peel and decades away from heroines like Buffy The Vampire Slayer and The Hunger Games' Katniss Everdeen. Only Mrs. Peel's predecessor, Cathy Gale (played by another real life martial arts student, Honor Blackman) came close to what she was doing on screen. It was the beginning of the female action hero, and its influence can still be seen today in the work of filmmakers like Quentin Tarantino.

Reflecting on the film's initial success on its thirtieth anniversary, Roger Ebert wrote: "What attracts audiences is not sex and not really violence, either, but a Pop Art fantasy image of powerful women, filmed with high energy and exaggerated in a way that seems bizarre and unnatural, until you realize Arnold Schwarzenegger, Sylvester Stallone, Jean-Claude Van Damme and Steven Seagal play more or less the same characters. Without the bras, of course."

In an interview with Confessions of a Pop Culture Addict, Satana offered a similar theory for the film's enduring success. "I would say that I think the appeal for it is basically because women are powerful. Especially Varla. Varla was the one who just went around killing everybody and taking what she wanted. She knew what she wanted out of life. She went for it."

Almost four decades after its initial release, Satana reflected on how far things had come for actresses like her and characters like Valma in 2003. "It's much better than it was. Women have finally come into their own. Before they were housewives. They were weak, or they were somebody's girlfriend running away. Somebody hiding, somebody crying, somebody weeping. But now it's a whole new ballgame. Women are starting to do something else beside stand in the kitchen and cook dinner, or look pretty, or be an ornament on the beach. You can still look pretty and kick ass."

And she was all in favor of it. The only thing she didn't support was the idea of a Faster Pussycat remake. Tarantino himself was rumored to be attached to the project at one point—with, bizarrely, Britney Spears being suggested for Valma—and Satana made it very clear that she found the whole idea completely unnecessary and insulting. "I think if he ever did that that'd I'd kill him," she quipped to Confessions of a Pop Culture Addict. "He'd kill my part so I would kill him."

Unfortunately, the revolution that Satana started with Valma didn't come fast enough to sustain her own cinematic career. Although she went on to star in a couple of classic B movies by Ted V. Mikels after the director discovered her dancing and fighting at the Silver Slipper in Las Vegas, her acting prospects stalled after 1973's The Doll Squad. Satana continued to focus on dancing, instead, before becoming a nurse. After a car accident in the '80s, she turned to less physically demanding work to pay the bills, including a longtime gig in hotel security in Reno, Nevada. She also made a number of convention appearances later in life, and even took on the occasional small film role in the early '00s. Throughout it all, she continued to kick ass until the very end.

"Despite having a pacemaker fitted in 2003, [she] seemed as tough as ever," The Guardian reported in her obituary. "Indeed, in one interview she recounted what had happened when an over-enthusiastic fan hid in her hotel room after a signing: 'He went flying across the room and wound up with a broken arm, busted nose and badly twisted leg. The house detective carried him out.'"

Tura Satana died on February 4, 2011 in Reno Nevada, but her impressive—not to mention intimidating—legacy lives on.

And although rumors still swirl around Quentin Tarantino and a possible remake, they remain just idle speculation at this point. Who, after all, would dare fill her Go-Go boots?