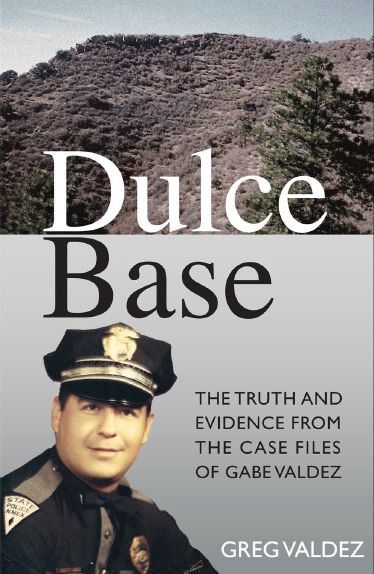 The Truth and Evidence from the Case Files of Gabe Valdez

Finally you will get the true story and evidence behind the mysteries surrounding Dulce, New Mexico. See what and who is behind the cattle mutilations and the alleged underground alien base in Dulce. You will also hear the story of Paul Bennewitz and see what really happened on the Jicarilla Apache Reservation. For the first time, you will see secrets the government does not want you to know.

In 1976, Gabe Valdez became one of the leading investigators into the cattle mutilation mystery that was spreading across the United States; based on his employment with the New Mexico State Police. As he started investigating the mutilations on the Gomez ranch outside of Dulce, New Mexico, he stumbled into much more than he bargained for.

His investigative findings led to a close friendship with Paul Bennewitz who was involved in a massive government-authorized disinformation campaign originating out of Kirtland Air Force Base in Albuquerque, New Mexico. The harrowing tale of Paul Bennewitz led to the story of the alleged underground alien base near Dulce, New Mexico.

For the first time, you will see what really happened in Dulce during the 1980s and you will see what the government does not want you to know. This true story is full of plot twists that were intentionally created by Air Force Intelligence and other clandestine Intelligence agencies associated with the United State Government. This book will separate fact from fiction and you will final be able to see the truth.

Get ready to read about military projects that are still currently classified and get to the bottom of this mystery. You will now have access to photos and evidence belonging to Paul Bennewitz and others which tell a very interesting story which have never been released to the public.

The next day they drove out to the location of the dead cow. Paul Riley of the New Mexico Cattle Sanitary Board accompanied them as they started to look around. When they arrived they located and examined the carcass of a three-year-old black, white-faced cow. The animal was lying on its side, and its left ear, tongue, utter, and rectum had been removed with what appeared to be a sharp, precise instrument. No traces of blood appeared on the cow’s skin. The hide on its underside was white so that spotting of blood would have easily been detected. Other evidence on the cow included a small puncture wound on the brisket.

Manuel located his pickup’s tire track from the prior day. “Look at this!” he said. “There are more of those smaller circular tracks on top of my tire tracks from yesterday, and they go back to the cow. There’s that oily substance I told you about on the phone last night, Gabe.”

As Gabe gathered evidence, he tried not to disturb the area until photographs could be taken. The three men concluded that Manuel must have interrupted whoever or whatever killed his cow and it or they had come back to finish what they had started—whatever that might be.

Evidence indicated that whatever left the tripod marks returned to the animal and removed its left ear. They found tripod marks over Manuel’s tire tracks from his visit the previous day, and the left ear was intact when he left to call Gabe and tell him about what he found. Investigation at the scene showed that the small tripod marks followed the cow for approximately six hundred feet. The cow’s tracks showed where she had struggled and fallen. The small tripod tracks also surrounded the cow. The ground had been scorched, and they found a yellow, oily substance in two places under the tripod marks. They also noticed that the object that left the tripod marks had landed on an old stump, and it looked like the mystery aircraft had almost tipped over when it landed.

Greg Valdez is the middle son of Gabe Valdez. He followed a career in law enforcement like his father and his been involved in this mystery all of his life as he accompanied Gabe on many of his investigations while he was growing up.