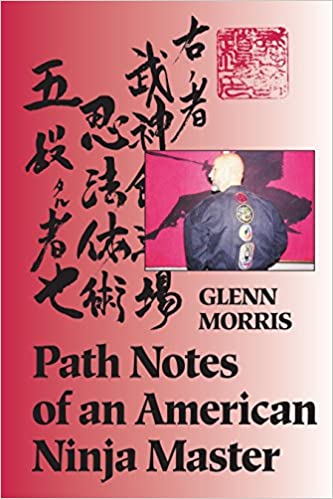 About Path Notes of an American Ninja Master

Using a lively style and the languages of transpersonal psychology, meditation, esoteric magic, and kundalini, Glenn Morris recounts his amazing adventures and hair-raising close calls while training and then practicing as a master of martial arts. Following in the tradition of the legendary Togakure Ryu of Japan, whose fighting techniques and lore inspired the fascination of westerners with Ninja warriors, he offers guidelines on how to tell sham from authenticity, how to keep friends while developing power, how to voyage safely into the inner landscape, and how to deal with dark forces-incarnate and disincarnate. At the same time, he provides exercises, tests, and adventures for the courageous-as well as spiritual and ethical compass.

In the summer of 1985 I began a series of experiments on myself following ancient Chinese and Japanese practices concerning the transformation of self. The result of this eclectic approach was the awakening of the kundalini, a very pronounced change in my perception, and a radical shift in physical health. Since the events of '85, I've developed a strong interest in Chinese traditional medicine and transpersonal psychology, as these two disciplines seemed to contain the most useful descriptions of what was/is happening to me as well as the best methods for protecting my sanity. I might add that very little of what I read at that time was particularly helpful, with the partial exception of Ken Wilber, John White, some tantric texts from Tibet, and Patanjali. The most useful information came from healers and martial artists. Only the martial artists seemed to exhibit the powers I was having to contend with and, depending on their degree of sophistication, had any understanding of the enormity of their gifts. As the years have gone by I have noted that many martial artists search for the esoteric in their art and find none. This book is meant to be a guide for them as to well as create some spirited discussion among the supposedly enlightened.

The lesser kan and li (opening the first four chakras or learning to run the microcosmic orbit) have become very easy to replicate in those who are willing to make the time to learn to breathe properly, and the transition to Kundalini is becoming so smooth that even the untrustworthy over-thirty crowd is going through it without taking damage. (Hindu term for connecting your genitals to your brain via the spinal column. The safer Chinese method for making this same energy connection is called the greater kan and li.) Just what implications the actualization of Western-educated enlightened masters holds is yet to be seen. Even the Chinese could not wish for more interesting times.

Dr. Morris is an eighth dan shidoshi in Togakure Ryu Bujinkan Ninpo, a martial lineage that has existed unbroken since the eleventh century, a six dan black belt in Nihon Karate Jujutsu, and a master instructor of esoteric meditation.