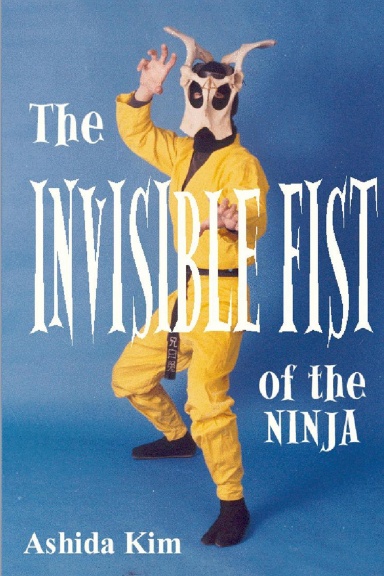 INVISIBLE FIST of the NINJA

About INVISIBLE FIST of the NINJA

"The hand is quicker than the eye" is a maxim known to every magician. Through distraction, diversion, distortion, obfuscation, and confusion a Ninja can disappear before the very eyes of his opponent, thus giving rise to the Ninja legend of invisibility.

Master Ashida Kim imparts his wisdom and defines the stances and techniques required for vanishing without a trace and fighting with the Invisible Fist.

The Invisible Fist was originally written and submitted for publication to Paladin Press in 1989. It was declined, because by that time relations between Kim-Sensei and Paladin Press were strained, Kim having discovered several titles that had be en re-named and were being sold without royalties being paid, and overseas sales that were completely unreported for many years.

In 1998 it was published by Citadel Press. After more than a year of "polishing" and their insistence that the chapter entitled "Book of Fire" be deleted and replaced because they were afraid some moron would injure himself trying the Fire Breathing Dragon technique. Since then, Carol Publishing Group, the parent company of Citadel Press has declared bankruptcy. Although they remain in business and continue to sell Kim-Sensei's books, such as Secrets of the Ninja in paperback edition through front companies like Berkeley Press, without paying the author a nickel. As part of the "liquidation" of Carol's assets, Invisible Fist, Iron Body Ninja, and the unfinished Ninjitsu For Women were sold, despite Kim's objections and in violation of his contract with Carol, to Kensington Publishing, who have merely carried on under-reporting and using "accounting devices" to rob the Author.

Since DOJO Press is the ONLY AUTHORIZED DISTRIBUTOR OF ASHIDA KIM BOOKS AND TAPES, this edition has been retyped and reproduced from original photos, in its original format with Fire Breathing Dragon included, instead of the forced changes.

Ashida Kim considers this book to be one of his best efforts to explain Ninjitsu,the only non-violent martial art known to Man, and deeply regrets the delay in providing this information to the public.