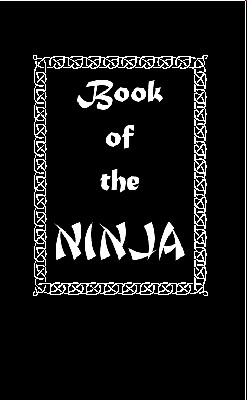 BOOK OF THE NINJA

Are YOU Ready for Serious Self-Defense?

Ninjitsu is an 800 year old system of fighting techniques, information gathering and psychological controls made famous by the feared Ninja spies of feudal Japan. Japanese warlords of old relied on a few black garbed Ninja to do what would otherwise have taken hundreds of armored soldiers to accomplish. Given here are some of the special techniques that make the Ninja invincible in combat. You will see that like most “magic tricks” the “secret of how it is done” is actually quite simple. Now anyone can become a shadow warrior of the night...

BOOK OF THE NINJA was originally written as a DOJO Handbook by Ninja Master Ashida Kim and Sensei Christopher Hunter and was distributed to their students as a training syllabus. In 1978 it was sold mail order in Soldier of Fortune magazine and attracted the attention of a Colorado company, who published it in 1980. It was promptly stolen and re-titled by unscrupulous publishers and has been sold in fifteen countries and nine different languages without the author receiving a red cent of the promised royalties.

The publishers mistakenly captioned a picture of Master Kim as being Sensei Hunter and never corrected the error, which has led to considerable confusion amongst the readership and provided grist for an army of jealous critics who claim on the one hand that we made it all up, and on the other that we stole it all from the military hand-to-hand combat courses.

DOJO PRESS has rectified this glaring mistake and is now the EXCLUSIVE distributor of this corrected edition, which has become a standard of reference for Ninja worldwide. 100 pages, photos and charts.

THIS IS IT! The little Black Book that started it all! In 1975, before anyone else had even heard of Ninjitsu, Sensei Kim and a fellow Shotokan 5th Dan were secretly teaching it at their Sixth Street Dojo in Central Florida. A school well known and "outlawed" by the commercial tournament crowd of the day.