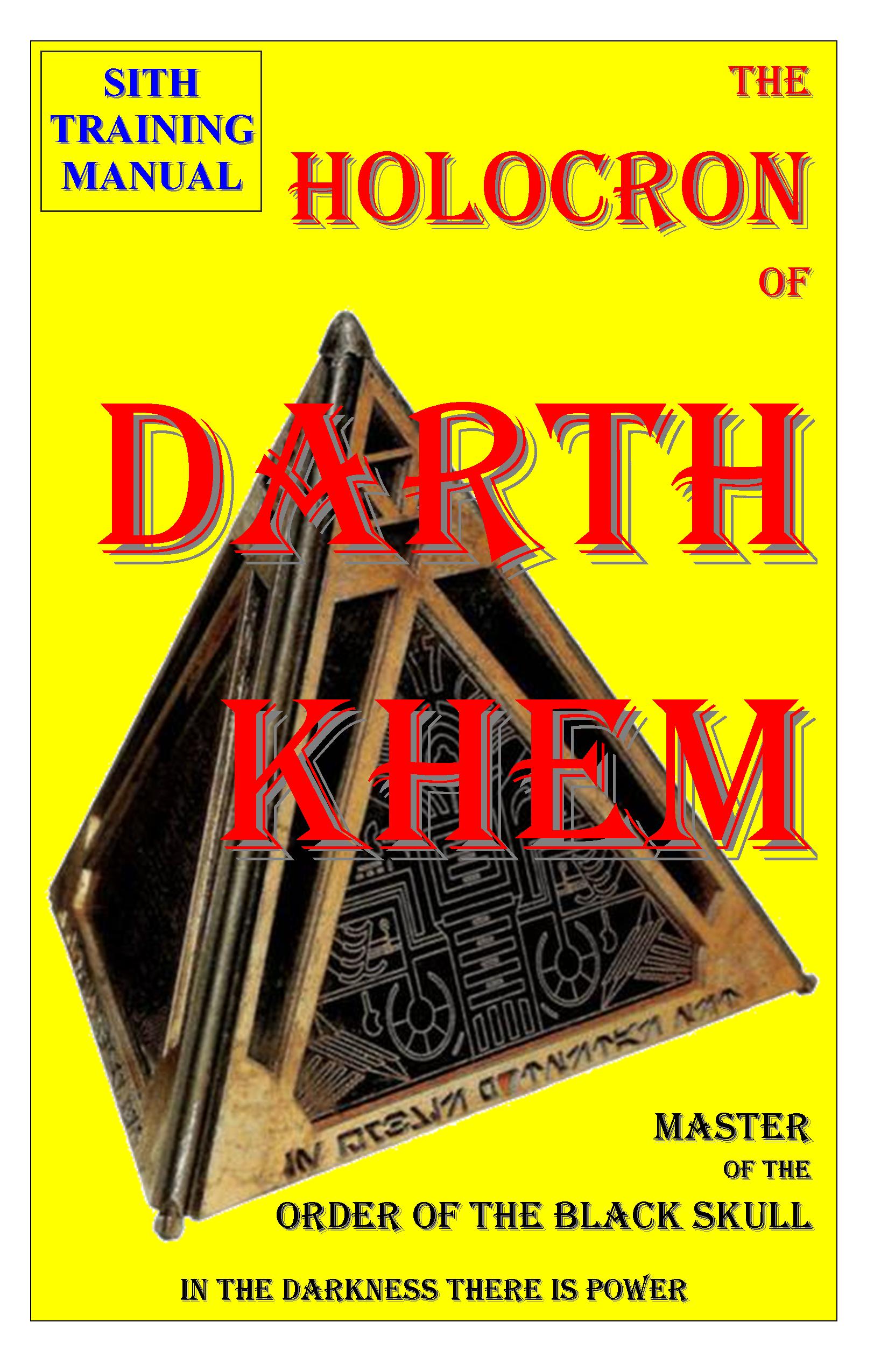 The HOLOCRON OF DARTH KHEM

Master of the Order of the Black Skull

The HOLOCRON OF DARTH KHEM

A Holocron, short for holographic chronicle, is an organic crystal-lattice device which stored phenomenal quantities of data guarded by the device's gatekeeper. Holocrons were used to hold information on Force techniques and instruction manuals by Force users beginning with the Sith and then the Jedi some three thousand years later.

“Holocrons are ancient repositories of knowledge and wisdom that can only be accessed by those skilled in the Force. Jedi use them to record and preserve their teachings, creating a record for future generations seeking to understand the mysteries of the Force. During the time of the Republic, countless Holocrons were stored on Coruscant; after the Jedi purge, however, they became scarce remnants of an era long gone.”

The TEACHINGS of DARTH KHEM-

Master of the Order of the Black Skull

"Sith of the Black Skull are attuned to using the dark side but nothing in that attunement means that one has to be negative or cruel as passions are far more than such things. Using the Dark Side to access the force is how the Sith of the Black Skull finds balance via the force because to invoke the darkness one must acknowledge the light and thus find balance in the ebb and flow of the center of all things. I ask those that find these words to explore the force through what I have taught as a foundation and by their works spread the ideals of the Black Skull Sith."

Darth Vader once spoke of having a crucible for a heart out of which sprang forth the dragon of the dark side. In the same way that the dragon of Vader reflected his weakness so too each Sith has the means to find the dragon within and see that it has not the flaws of Vader. This Sith Training Manual shows you the way.

About the Order of the Black Skull

A group of force users devoted to the ways of the Sith as they were defined in the era of the original Sith empire. Indeed this Order was founded by a group of pure blood Sith to preserve the pre-Jedi influenced force culture. One feature of the Black Skull sect is the ritual consuming of blood and organs that is used to empower workings through the excitation of Dark Side energies. This is a throw back to less civilized times before the Jedi as blood-soup is a staple of the ancient Sith diet. This practice is a bit of a weakness to the Order as it is a means to identify them. Members of the Order weaken if a certain amount of blood is not consumed on a regular basis.

Adepts of this order do not employ weapons that are machines such as Lightsabers and blasters. Members of the sect manipulate the Force through the Dark Side which they see not as a current of the Force but rather a gate and philosophical lens to access the Force. Minions and agents can be taught some skills of the Dark Side but only one student will be the apprentice of the given master. In that way the secrets and therefore the power of the Order are maintained even as the reach of the Order is made to grow through the cultivation of agents. The "rule of two" means to the Black Skull that only one student of a master will learn all the lore of a given master and that one pupil will be the heir of that master.