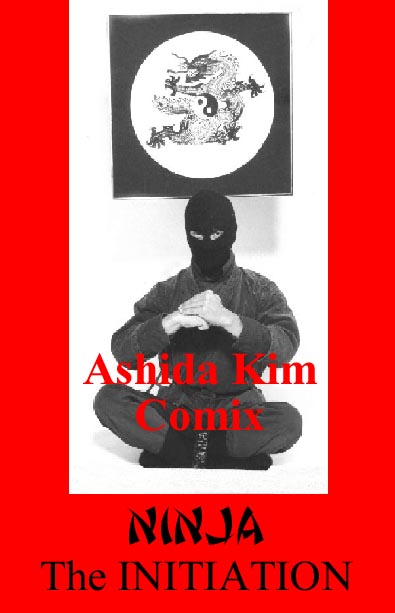 In addition to his notable skills as a Martial Artist, Sensei Ashida Kim is also an accomplished graphic artist. In fact, on his first trip to South Africa in 1989, he was presented with a professional artist portfolio and pen set by the many friends and students he met there as a memento of his visit. This fantasy artwork novella, and several others, were written and illustrated over the past few years as a series of sketches and short stories. They were compiled into this volume by his friends and fellow artists to entertain, amuse and share the mythology and symbolism of the Ninja.

"The INITIATION is a pen and ink graphic novel that illustrates several legends of Ninja lore. The Pledge, the Sword Lesson, the Buried Alive Purification Ritual, the Lesson of the Empty Vessel, the Spirit Helper, the Way of the Mind Gate, the Rebirth, the Kunoichi, the Tea Ceremony, The Maze, the Swamp of Despair, the Pillars of Good and Evil, the Invisibility Test, the Inner Sanctum, the Final Guardian, the Book of Enightenment are woven together into an entertaining and amusing series of illustrations. Comic books have always been a hobby of mine. This is just one that deals with some of the Ninja stories and philosophy I have heard."

Grandmaster Ashida Kim is an internationally famous martial artist specializing in Ninjitsu. He has written over a dozen books on the Secrets of the Ninja, invisible assassins of feudal Japan, and toured all over the world teaching and training Kata Dante-The Dance of the Deadly Hands. He is a member of the Patriarch Council of the American Chapter of the Black Dragon Fighting Society founded by Count Juan Raphael Dante.

When the "Ninja craze" hit in the nineteen eighties, Ashida Kim was not the first to break the code of silence surrounding the Art of Invisibility, BUT he was the ONLY Ninja to appear masked to maintain the secrecy of the Art. For that, many so-called experts and internet commandoes called him a fake and a fraud and a charlatan. But, not to his face.