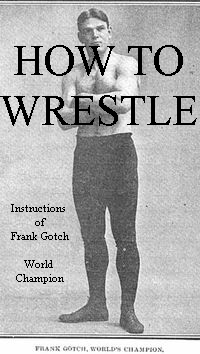 About HOW TO WRESTLE

Frank Gotch was, and remains today, an American icon, a hero par excellence and wrestler without equal. The simple instructions, described here in Gotch’s quiet, modest, unassuming style and manner not only serve as a handbook of techniques for the aspiring grappler, but also provides a certain insight into the calm and analytical mind of the greatest wrestler the world has ever know. His legacy lives on in those who practice his method and honor his name. It is a standard not many can achieve.

American Catch-as-Catch-Can Wrestling is a unique combination of Greco-Roman throws, takedowns and holds and the dirtiest barroom brawling tricks ever devised. Thus making it perfectly suited as an art of self-defense or for spectacular exhibitions as seen in modern professional wrestling. Abraham Lincoln was reputed to be a master of it during his backwoods days before becoming president or the United States. When World War II began the US Army held a competition to see who the best fighters were to train our soldiers for combat. The wrestlers won, hands down, because they were willing to fight dirty and take advantage of every opportunity to win. No other “sport” included slapping the face, gouging the eyes or fish-hooking the mouth to rip the face. No other “sport” deliberately went after any injured limb of the opponent to make him submit.

This 21st century edition of Frank Gotch’s classic text on Catch-As-Catch-Can Wrestling was produced from illustrated reproductions of the original 1929 publication which were drawn from photographs of Franks Gotch demonstrating each technique in an earlier book, No. 20 in Fox’s Athletic Library, WRESTLING by Frank Gotch, published by Richard Fox, owner of famous Police Gazette, in 1908 and additional biographical material in public domain. Anatomical charts that did not appear in the first book have also been added for reference and clarity.

Some of the Illustrated Techniques:

In a 1904 match, Gotch defeated then American Heavyweight Champion, Tom Jenkins (later wrestling coach at West Point) and challenged World Heavyweight Champion Georg Hackenschmidt for the international title. Hackenschmidt was undefeated at the time, but submitted to Gotch’s Toe-Hold after two hard fought hours of grappling. Some claim that Gotch “cheated” by oiling himself up so Hackenschmidt could not apply his favorite hold, the Bear Hug, that squeezed the wind out of an opponent’s chest until he submitted or passed out. Gotch became instantly popular and was even invited to the White House by then President Theodore Roosevelt. He remained World Heavyweight Champion until 1915 with a professional record of 154 wins and only 6 losses.