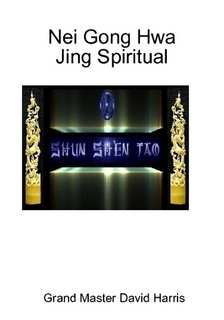 The Shun Shen Tao Institute of Natural Healing conducts ongoing investigations into the deeper nature of Qi, its qualities, and how the institute's discoveries correlate with ancient text regarding bio-energy matricies and flows. The Institute's collections of ancient texts have been donated by individuals from around the world who support the translation work of Grand Master David Harris. The text themselves span approximately 4500+ years having been passed down generations of Master to Master. Some of the texts are originals, however most are archive copies now stored on modern media.

Now Grandmaster David Harris shares it with you in hopes that it will benefit your health and the health of others that you may choose to share it with. This DVD is not meant/intended/implied to diagnose/treat/cure any disease or condition.

In this DVD, Grandmaster David Harris Ph. D. demonstrates Nei Gong Hwa Jing Spiritual Application, which is an energetic technique. This DVD teaches the basics of exorcism for possession and oppression. Included is an explanation of spirit classes.

Healing the Spirit, Restoring the Soul

“I have now turned the knowledge and energy I originally learned to inflict damage or death into healing.”