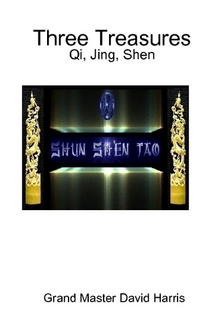 "These techniques were once widely known, then were forbidden. Now it is time to share them with you again. It doesn’t take years of training or pain. Just a few basic steps. Anyone can do them. It’s as simple as that...

Learn the secret Kung Fu exercises that make you:

Immortal champion of light and justice...

Grandmaster David Harris Ph.D. teaches anyone how to make their everyday activities and/or their martial art skills more effective and more powerful. The skills taught can be applied to opening a jar to kicking a workout bag. Qi Movements, Jing Motions, Shen Technique-The Basic foundations to Shun Shen Tao. This video teaches the priceless learning and training techniques of the Shun Tao system. These techniques are not only priceless; the use of them will improve your skill and ability towards anything to which you apply them. The Three Treasures of Martial Arts training are: Qi, the vital life-force; Jing, the inner strength and Shen, the fighting spirit.