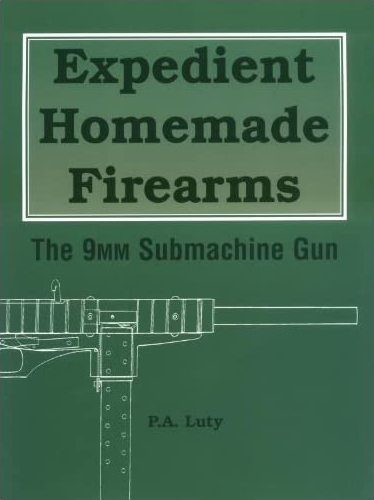 By Philip A. Luty

Imagine, if you will (and you need not have an overly active imagination), that you live under a regime that has banned most types of firearms — or controls them so tightly that they may as well be banned. In such a place, you, the gun enthusiast, might still be able to build your own improvised firearms — providing you have the necessary knowledge and facilities, including a fully equipped machine shop complete with a lathe and milling machine. Lacking these, however, you would likely find yourself frustrated by your creative efforts.

Author P.A. Luty lives in just such a place and understands the frustration of attempting to build homemade guns based on designs that are just too complicated or so crude as to be undesirable. Luty's idea of a homemade gun is one that can be built by just about anyone, even under adverse social conditions and regardless of available facilities: an expedient firearm. In this book he presents clear, step-by-step instructions for manufacturing such a firearm — one that is of simple design, easily constructed in about a week's time, and made of readily available materials, primarily steel tubing. The 9mm submachine gun described herein is of straight blowback design, fires from the open bolt, and holds 18 rounds. It is not pretty; its main priorities are reliability and simple functionality.

Expedient Homemade Firearms was written to illustrate that no amount of restrictions can prevent those wanting firearms from having them, and it is an invaluable resource for all those who refuse to be helpless subjects of the state. For academic study only.

From gun bans to surveillance cameras, the state lulled the citizen into a false sense of security. The people — in many cases willingly — gave up the means of self-defense and self-reliance in the misguided hope of a safer and more secure society. But the people have now become helpless, dependent subjects, and the only security is that enjoyed by the state.

About Philip A. Luty

Philip A. Luty (1965 - 8 April 2011) was an English anti-gun control activist notable for the production of homemade firearms and manuals providing instruction in the same. He was charged with illegal arms construction in the late 1990s and sentenced to four years in prison, with other investigations ongoing at the time of his death.